Especially in the United States, baby boomer retirements and fewer graduates with accounting degrees is posing a growing challenge to finance department executives in attracting and retaining the best accounting talent. The solution, which may not seem obvious, is to make accounting cool, again.

Wait, what? Was accounting ever cool? Well, maybe it depends on what you think is cool. Double-entry bookkeeping, codified in the 15th century by Fra Luca Pacioli, a Franciscan friar and pal of Leonardo Da Vinci, was essential for the expansion of trade and the creation of the modern corporation. Bookkeeping and accounting were as important to economic development as two other financial inventions – insurance and fractional reserve banking. Double-entry bookkeeping is an elegant system, simple yet powerful. It supports the accurate recording of transactions and the economic condition of an organization as well as analyses of its performance. So yes, in a nerdy sort of way, that’s cool.

On the other hand, too much of what accountants do today is desperately dull and tedious, which discourages many from the profession. The good news is that, in this decade, technology will have a more profound impact on how finance and accounting departments operate than over the past 50 years.

We’re on the cusp of the third major accounting advance made possible by technology. The first occurred with the advent of the information age in the 1950s and 1960s. People-intensive functions such as billing and transactions processing were automated using digital computers. The second began in the early 1990s with the adoption of client-server enterprise resource planning systems and business intelligence tools. Over that decade, departments became substantially more efficient. This was evidenced by the 42% decline in the number of finance and accounting department employees per million dollars of revenue. 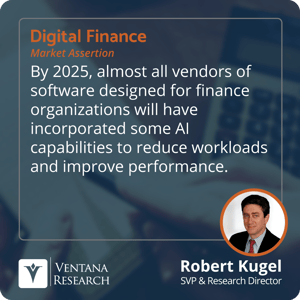 While there have been limited gains in efficiency since then, a mix of supporting technologies such as novel database structures, application programming interfaces and artificial intelligence have been maturing. I assert that by the middle of this decade, almost all vendors of finance and accounting department software will have incorporated some form of AI capabilities to reduce workloads and improve performance, and this will create a strategic advantage for those early-adopter finance organizations that learn how to exploit the technology.

The next stage in the evolution of the finance and accounting department will transform the nature of accountants’ work. Accounting is unlikely to become glamorous anytime soon, but it is about to be “cool” again. I mean cool in the sense that over the coming decade, technology will eliminate much of the tedium now associated with accounting work. Applications will automate much of the repetitive work that today requires human intervention, freeing individuals from having to perform rote, repetitive tasks, shortening processes and supporting a department that is more forward-looking. Advances in software will streamline and standardize processes and procedures by having systems recommend courses of action. Technology will support data integrity, ensuring accuracy and eliminating the need for checks and reconciliations. It will strengthen governance and control, thereby cutting down on the time required for thorough auditing.

In so doing, technology will take the robotic work out of accounting jobs. It will make it possible for the finance and accounting organization to play a more forward-looking advisory role in addition to its transactions processing and fiscal control functions. Although many have focused on how technology will eliminate jobs in accounting, it’s more likely that there will be about the same number of people in the department. However, the roles and skills of these people will be different.

Meanwhile, the application of columnar database technology and in-memory processing is beginning to revolutionize the performance of ERP and financial management systems in a way that makes a new approach to accounting possible. Ventana Research calls this new approach “continuous accounting.” It’s now possible to quickly generate a trial balance and monitor the financial condition of the entities recorded in the system in near real time. It’s also possible to create a virtual close at any point by calculating (but not posting) depreciation and amortization, and accruals such as sales commissions. Executives and managers can monitor financial performance more closely without the lags that are common today.

Reporting is increasingly more automated and self-service-based, so people in the department avoid spending hours pulling together data that they dump into spreadsheets. Reports are more immediate and more comprehensive. Remote audits by auditing firms became common when office lockdowns prevented on-site visits. The next logical step is the transition to a virtual audit that saves everyone time and money.

More timely and comprehensive reports are the result of ongoing advances in data preparation technology, a topic on which my colleague David Menninger has done research. Increasingly, the “numbers” that run the organization are a fusion of operational and financial data, readily available to business users through application-specific data stores. The ability of finance departments to routinely collect and synthesize operational and financial data from multiple sources is critical to their ability to perform the analyses necessary to manage an organization. Efficiently bringing together an evolving set of timely data is central to being able to provide such analyses. Perhaps for this reason, nearly 9 in 10 participants (88%) said that self-service data preparation is important. The finding suggests that tomorrow’s finance department will be equipped to synthesize financial, operational and third-party data to provide analysis and forward-looking guidance to executives and managers. 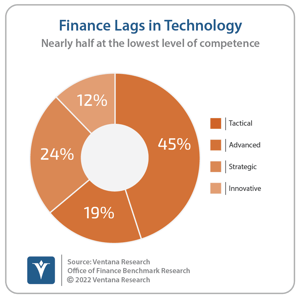 The snag in this rosy scenario is that finance and accounting departments must embrace technology as a catalyst for achieving major improvements in processes, enabling the department to reduce tedium and have time to take a more forward-looking advisory role within the organization. In most companies, the danger is that without leadership, organizational inertia will slow adoption of new technologies while echoing the familiar phrase, “We’ve always done it this way.” Our Office of Finance Benchmark Research finds that most finance departments lag in their use of technology. Just 12% of departments had sufficient competence to qualify as innovative in their use of technology – the highest level of competence and effectiveness in our assessment. By contrast, 45% were at the lowest, tactical level. There are reasons to be optimistic, though, that organizations will embrace the changes made possible by technology at an increasingly rapid pace in the 2020s. One is that finance and accounting departments, especially in midsize and larger companies, have evolved steadily over the past few decades in adopting new information technology. There aren’t nearly as many adding machines or calculators on the desks of accountants as there were 20 years ago.

A second reason is that we’re making progress “one gold watch at a time.” An older generation that is less comfortable with technology is being replaced by those who don’t know how to use a rotary dial telephone. The third is the technology itself. The technology “breakthroughs” of past decades now appear quite primitive. Business applications are reaching a stage where they are transforming how work is performed, rather than applying simple automation. The cluttered and tedious user interfaces that were the norm for decades are giving way to designs that facilitate thought as well as promote efficiency.

Technology is the key to driving change. Those already in the profession who aren’t facing retirement and those considering accounting as a profession must be ready to embrace a different mindset, one that more readily accepts change. A fast-follower approach to technology adoption is now a necessity, not some futuristic dream. New business tools provide people and organizations that are willing to adopt them early with an opportunity to gain an advantage over those that are slower to pick them up. Departments must become fast followers of technology to enable their organizations to achieve a competitive advantage or at least remain competitive – to become cool once again.