The Cloud Can Help You Get Smarter If You Let It

One of the potential benefits of cloud computing to access business applications and data is its potential to improve the situational awareness of executives and managers. By this I mean their understanding of what’s going on outside their company in addition to what’s happening within it. Today people have access to a trove of information about their own company, which is the result of decades of investment in an expanding range of enterprise transaction systems (ERP, CRM and supply chain management, for example) and convenient data stores that make accessing data easier than ever. But although people have access to internal information, most have big gaps in their knowledge about what’s going on in the outside world. Take, for example, market trends, information about a competitor’s, supplier’s or customer’s financials or industry-specific demand forecasts. Our benchmark research shows that while two-thirds of companies are satisfied with their ability to integrate information from standard internal sources, only 39 percent feel that way about reference or competitive data from external sources and 36 percent about text data from social media.

Cloud-based deployment of applications has the potential to 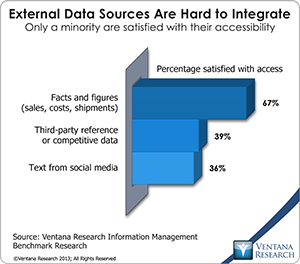 address this intelligence deficit, but only if users demand it. In some respects, the dearth of external information today is a legacy of limits imposed long-ago by computing infrastructure. Obtaining information about the world outside the four walls of an organization used to be difficult, time-consuming and not always trustworthy. Some people may have had subscriptions to magazines or industry newsletters. Yet unless these publications were nearby and you knew it, accessing their information was difficult. Today, however, almost all such information is available on the Web, often for free. If, say, you need to track production of closed die forging, press and upset forging by country in Europe, you simply look here. The Web has made it easier to receive and use information. Not too long ago, updating third-party data stores involved getting delivery of physical media (such as optical or magnetic storage discs). However, the bad old days linger on in attitudes. Most business people are not in the habit of thinking about integrating external data into enterprise systems, which I assert is one reason why only about one-third of companies have satisfactory access.

Human nature is another reason why external information is not as available as internal. Organizations tend to look inward. Too often, performance is assessed only on an us-vs.-us basis, as in comparing actual results to a budget or to the same period a year ago. But business is a competitive game, not solitaire. In the past, it might have been difficult to use external benchmarks to measure an organization’s own performance, but in today’s environment it’s not. And there’s no good excuse for persisting in bad habits that prevent companies from using more information about the outside world. Organizational habits can be altered, but doing so usually requires a change of tone at the top. CEOs and senior executives stand to gain the most from better situational awareness, but I worry that few of them understand that a lack of readily available external information is undermining their company’s ability to compete.

Speaking of bad habits, the integration of new technology into business operations has long been unsteady and inconsistent. It took about half a century after the invention of the fractional horsepower electric motor for the redesign of factories to take advantage of the greater flexibility of that technology over steam engines. By comparison, adoption of the Internet by business has been stunningly swift in some respects but not others. When it comes to the cloud, the extent of adoption differs considerably. Businesses that thrive on novelty – and the parts of the business that are most engaged in novelty (such as marketing, sales and product design) – have been the earliest to incorporate cloud technology into their processes and systems. Industrial companies and departments such as finance and operations have been slower to bring new information sources into their management processes. All companies can benefit from increasing their understanding of what’s going on outside their four walls. The cloud is there to help – but only if companies and their executives want that help.