TradeLens Emerges in a New Era of Trade

What’s the easiest way to completely immobilize a 500,000-ton ship?

Lose a sheet of paper.

The paperwork that accompanies international trade is a serious source of friction, inefficiency — and therefore cost — in supply chain execution. Trade documentation requires massive amounts of paper that today can be replaced by digital data. In 2018, Maersk, the world’s largest shipping company, teamed up with IBM to create TradeLens, a digital platform that utilizes blockchain technology as a secure, unified source of trade transaction data used by businesses, financial institutions and government authorities. TradeLens is designed to enable all participants to connect, share information and collaborate, providing them with a comprehensive view of the data they need to transact trade. The system makes it possible to digitally collaborate in handling their global supply chains.

TradeLens enables port operators, customs authorities, freight forwarders and importers to track containers and their contents. A key objective of TradeLens is to substantially reduce the inefficiencies and delays created by paper-based systems used for customs, trade finance, tariffs and taxes as well as supply chain and logistics management. TradeLens cuts supply chain latency because it can take seconds or minutes for cargo to clear customs rather than hours.

TradeLens is likely to benefit from a significant shift in how corporations are managing their supply chains. Until recently, innovation in communications and transportation made long or complex supply chains practical. Globalization of supply and demand chains followed as companies found cost and other advantages. Today, however, long or complex supply chains are increasingly vulnerable to disruption from acts of state such as tariffs, trade restrictions and taxes. Companies must be able to adapt quickly to changing conditions and be able to do more rigorous contingency planning to speed the decision-making process. 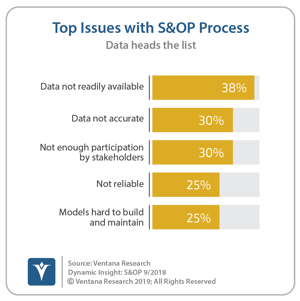 found that 38 percent of companies identified an inability to access data as an important issue hampering their sales and operations planning; 30 percent said that data accuracy was an issue.

Digital cross-border shipping documentation is still in its infancy. TradeLens is in operation in important ports such as Hong Kong, Singapore and Rotterdam. For their part, countries are beginning to encourage the use of electronic customs declarations, allowing online payment of tariffs and fees as well as the pre-clearance of shipments. TradeLens aims at making digital data exchange the norm and therefore universal.

Paper-based systems have persisted well into the digital age because until now there hasn’t been a workable alternative. Cost, security and data quality issues posed by point-to-point integration of thousands of heterogenous systems or multiple proprietary networks have made paper systems the least-worst choice.

A blockchain-based digital document platform such as TradeLens addresses the issues that have prevented wide adoption of digital documentation. Security is inherent in a blockchain because of its structure. It uses public key encryption, which ensures that only those with validated permission can access specific data. The multi-independent node structure makes it all but impossible to forge or fraudulently alter data. Unlike permissionless blockchains like bitcoin, which are designed specifically to maintain the anonymity of participants, the identity of each blockchain member on a permissioned blockchain such as TradeLens’ network is transparent. This controls access to only selected organizations. A permissioned system defines how members can access the blockchain as well as the data an organization can read, access, and write on the blockchain.

A blockchain platform is ideal for exchanging trade-related data because it connects disparate systems with a loosely coupled architecture that supports many-to-many relationships. In computing, a loosely coupled system is one in which each of its components has little or no knowledge of the details of other components. When two such systems connect, the sender communicates a message in its native form and format in the expectation that the receiver will be able to fully and accurately understand the content of that message. This objective is achieved through semantic standardization — that is, when the data format and the protocol used to structure the data makes it possible for disparate systems to correctly process the data. Such standardization is feasible in a system with a limited number of tasks and where it’s relatively easy for the participants to agree on data structures and protocols. This is especially true if a blockchain replicates existing forms or commercial documents.

TradeLens provides a method for such trade document sharing — documents such as commercial invoices and packing lists. Authorized users with the required permissions can upload, download, view and edit documents with version control. And because of the blockchain structure, the documents provide full traceability and are essentially immutable.

TradeLens is a timely development. I’ve been noting that we’re in a new era of trade, the result of converging issues that have been building for at least a decade. Structurally and politically, the liberal ethos that drove the trade environment through the second half of the 20th century and into the 21st has changed. The era of broad multilateral agreements is giving way to multi-bilateralism or regional arrangements. Adding to the challenges posed by a shifting trade environment are commodity and currency market volatility and the impacts of ongoing legal, regulatory and taxation changes. TradeLens will make it easier and less costly to conduct trade in this new, more complicated environment. I recommend that companies that are involved in international trade familiarize themselves with TradeLens and plan to take advantage of the increasing digitization of trade documentation.