An interesting event at the recent Oracle OpenWorld was a panel on this topic led by Ken Comee, CEO of Badgeville. Offered in the Oracle 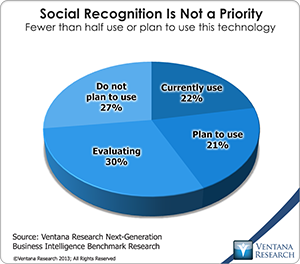 Cloud Marketplace, his company’s Behavior Platform helps users of Oracle Sales Cloud enhance sales productivity. The focus of the panel session went beyond flashy new technology and faddish business management practices. It focused on how to apply gamification, a form of social recognition, to business-to-business (B2B) settings and within the enterprise. Currently its use is not widespread. Our research on next-generation business intelligence finds that only 22 percent of companies use social recognition technology to commend employees for contributing to or accomplishing tasks, and only 21 percent more plan to use it. Perhaps one reason, which all of the panelists mentioned, is that the term “gamification” turns off executives. One panelist related that her group decided to use the acronym RAMP (recognition and management program) to make their initiative sound more business-like and therefore more acceptable.

The panel discussion highlighted the evolution that is taking place in gamification. The term originally applied to the use of motivational techniques to stimulate employees’ engagement and involvement in business tasks. In the digital world gamification borrows from techniques first employed in computer games to encourage players to keep playing by providing psychological rewards such as achieving successive game levels, badges, awards and rankings. Initially, people marketing to consumers embraced the concept as a way to keep customers engaged before and after a transaction, the goal being to create advocates, build brand loyalty and encourage repeat buying. As with other social technology innovations, serious business people have started to incorporate it into B2B and enterprise settings. American Express Travel Services (which provided a panel member), for instance, sees it as a way to increase compliance with corporate travel policies. Measuring and ranking the extent to which individuals book at least three weeks in advance or avoid using human agents seems to have the desired effect, according to the speaker. Offering cash rewards is another technique that can be profitable if paying $50 to employees is sufficient motivation to achieve a level of compliance that saves a company thousands of dollars. As with any incentive program, however, it’s important for organizations give serious thought to the design. What may be considered an incentive can have unintended negative consequences. (By the way, gamification also can be used in a broader human capital management context to better understand the often hidden contexts of an organization: Who does what and who influences whom?)

However, gamification exists in a broader context, which I think enterprise software companies should embrace. Beyond its value in promoting diligence and conformance, gamification is an element of what I would call the ergonomics of software. Increasingly, work is mental rather than physical, and computing innovations can spur effectiveness as well as efficiency in performing tasks. So business software design should pay attention to the psychological aspects of its use in addition to considering the number of clicks, screen layout and other user interface elements. Decades ago, designers began to make tools used in manufacturing, cooking and home repair easier to use and more effective in performing tasks, as well as less prone to promoting repetitive stress injuries. Today, for example, compared to the mid-20th century models, office chairs are much harder to tip over and offer better support. It’s a great analogy for software. Why shouldn’t we expect business software to work in a way that uses people’s cognition and emotions to greater effect? Such considerations are becoming more urgent as the baby boomer generation is replaced by generations who have different experiences with and expectations for technology and work – a point I stressed in my 2013 Research Agenda.

Meanwhile, most business software remains mired in designs that feel 20 years old. Notwithstanding Oracle’s offering of Badgeville on its Sales Cloud, enterprise applications are still too much like electronic versions of paper-based systems. Development efforts are incremental at best. Perhaps that’s inevitable. It took decades for the automobile to lose its “horseless carriage” engineering paradigm. However, software companies that can crack the code (so to speak) and build more ergonomic software will likely reap the rewards from new generations of users.