A Profile of Strategic and Long-Range Planning

As I define it, strategic planning is the formal conceptualization of a corporation’s strategy and its individual supporting elements, such as product strategy, sales and marketing strategy, pricing strategy and financial strategy, to name four. The strategic planning process is aimed at putting ideas into words to ensure that everyone has a clear understanding of the strategy. Moreover, the process of defining the strategy involves some degree of effort to achieve agreement among those concerned about the overall strategy and the constituent parts. The degree of this effort is a function of the organization’s management style and culture, as some are more participatory and consensus-seeking than others. By its nature, strategic planning is done at the highest echelons of an organization. It therefore is typically done by a relatively small group of senior executives.

Long-range planning is the next step. It is the formal quantification of the strategic plan and how that strategy is expected to play out. Typically this takes place yearly; the research shows that three-fourths of organizations develop a long-range plan annually, and most review it either monthly (41%) or quarterly (29%). The number of people engaged in the long-range planning process is a function of a company’s size. On average we calculate that very large organizations (those with 10,000 or more employees) have 19 employees directly engaged in the process, compared to 14 for large organizations (1,000 to 10,000) and eight in midsize companies (100 to 1,000 employees). How “long” is long-range planning? That depends on the nature of the business and the attitudes of executives. At its simplest, a long-range plan extends the annual budget out another two to four years at a much less detailed level. Its purpose is to paint a picture of the future in enough detail to serve as a basis for planning beyond the upcoming fiscal year. Some businesses, such as pharmaceuticals, engineering and construction, aerospace and estate-bottled wineries, however, have longer than average cycles; it’s not uncommon for these businesses to be looking out 10 or even 20 years.

The research found that companies can take anywhere from weeks to 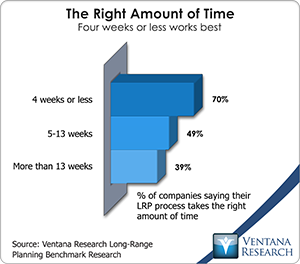 many months to complete their long-range planning. The right amount of time to spend on this process depends a great deal on the specific circumstances of an organization. Also, how long it takes to perform long-range planning depends on how one defines the starting point. For example, a corporation may kick off a series of high-level discussions about strategy in September, begin hammering out the details of a quantified long-range plan early in November and complete it at the start of December. Using my definition, I define the process as taking four weeks, not three months. That noted, the research suggests that one month to develop the long-range plan is ideal. Of those who said creating their plan takes the right amount of time, 70 percent do it in four weeks or less, while diminishing percentages of those that take five to 13 weeks (49%) and even longer (39%) said their plan takes the right amount of time. Conversely, half (53%) of those that take longer than 13 weeks said their process takes too long, compared to 37 percent of those that take four to 13 weeks and only 22 percent of the organizations that take four weeks or less. Shorter can be better if it becomes possible to focus on the essentials and drives an agile, action-oriented approach to planning. As well, a process that takes too long may be poorly designed or inadequately supported by training, data and technology.

Long-range planning is mainly directed from a corporation’s headquarters since it’s undertaken mostly by senior executives to establish company-wide objectives consistent with corporate strategy. More than eight in 10 of the participating organizations have a process that is highly or somewhat centralized. Of the various size categories of companies, midsize companies (60%) most often have a highly centralized process; in contrast, twice as many very large organizations as overall have a mainly decentralized process (31% vs. 16%). The largest organizations are more likely to have a “holding company” structure in which the business models of individual divisions are different enough and the scale of the operation is large enough to warrant a more distributed form of long-range planning.

Most participants (55%) described their process as top-down with bottom-up input. This approach establishes a formal, structured dialogue in which senior executives establish goals that are informed by input from those who will have to realize them. The information technology being used has a direct impact on the richness and value of this dialogue. If software or data issues bog down the back-and-forth or inhibit the scope of the discussion, the effectiveness of the planning process inevitably is diminished.

There’s room for improvement in almost every aspect of the long-range planning process. Only 5 percent of participants said their process works so well that no improvements are needed. The majority (59%) reported that their process works well enough but needs some adjustments. One-third see a need for substantial change, with 27 percent saying the process is adequate but requires changes, and another 5 percent calling it inadequate and in need of major changes. In analyzing the research data I saw a similar pattern throughout the responses (a small number of respondents giving some aspect of their long-range planning process high marks, about half giving a good-but-not-great assessment and the remainder see a need for change) elsewhere as well: in participants’ assessments of their abilities to select initiatives and capital projects, manage the execution of major initiatives and capital projects, align long-range planning with strategy and measure actual return on investment.

Based on conversations that I’ve had with people engaged in long-range planning, some or even many of those that think their process needs only some adjustments may be asking less from the process than they should. If they considered what’s possible rather than looking at what they do as a given, they would be less satisfied. Moreover, the danger with a “good enough” mentality is that it lacks a sense of urgency and prevents organizations from driving themselves to make incremental changes that could produce more effective plans. Those that find their organization’s performance unsatisfactory should take action; superior long-range planning is vital to the success of an enterprise. Even companies that think they are doing a reasonably good job should evaluate their process to improve the results it delivers.