Salesforce.com’s recent Dreamforce user conference got me wondering about how far the market for cloud-based software has come. To answer that question, I looked to our own research. For the past several years Ventana Research has routinely asked participants in its benchmark research what preference, if any, they have for deploying software they use to support the activity we are benchmarking. The choices we offer are on-premises, software as a service (SaaS – that is, in the cloud), hosted on a vendor’s servers) or no preference. I examined the responses from 1,110 participants in five benchmark research undetakings that cut across lines of business and IT areas to determine what, if any, patterns I could find in the responses.

In aggregate, on-premises continues to be the preferred deployment method for two out of five participants, while 22 percent are indifferent. One-fifth (22%) prefer cloud-based SaaS, and just 11 percent prefer to have the software hosted by the supplier. However, analysis of the research findings shows that there is a meaningful difference in deployment preference based on the area in which the participant works. As summarized in the chart below, IT and finance folks are significantly more likely to want to have software installed on premises (51% and 47%, respectively) than those in front office roles (38%), administration (36%) and operations (37%). Conversely, those in operations (people working in manufacturing, supply chain or R&D, for example) are far more likely to want to use SaaS (37%) than workers in other areas, whose preference for on-demand deployment ranged from 19 percent to 23 percent. The least cited preference, a hosted solution, was the choice of those in administrative and front office roles (14% and 12%, respectively) more than of those in operations or IT (6% and 7%). 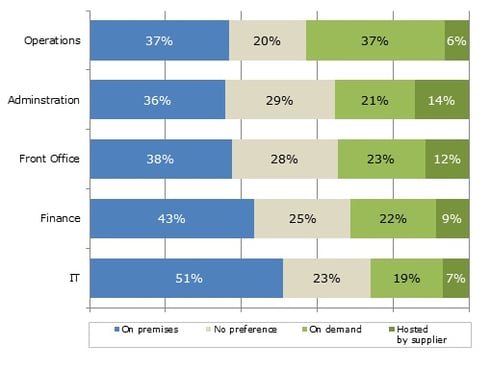 The research also shows very limited variation in preferences by the size of the company and the industry in which it operates.

Our benchmark research programs don’t examine the sources of participants’ preferences, but I’ll offer some hypotheses about the reasons for the disparity. IT departments are more likely to want on-premises deployment because they are comfortable with this approach and prefer to have control. (Less generous explanation hypotheses would focus on their self-interest and not wanting to put themselves out of a job.) Finance departments are notoriously sensitive about security and keeping “the numbers” safe from prying eyes. They, too, have a preference for directly controlling the software they use and typically are more conservative in their business practices than ????. On the other hand, people working in other parts of the company are more concerned with getting the job done and probably less concerned with deployment details. Indeed, people in operations or those in front office roles may prefer to get some capability immediately rather than having to wait for approval of a capital spending outlay and work through the integration of some bit of software with the organization’s IT infrastructure.

Our research shows that on-premises remains the preferred method of deploying software but that is changing rapidly. We advise organizations to understand their options and use an objective assessment, not prejudices or habits, in deciding how best to buy or rent software for their organization.