Oracle OpenWorld is a fall event that sprawls over a lot of territory – figuratively in terms of the IT landscape and, if you’re in San Francisco, literally. My focus here is on the ERP portion of the company’s software portfolio.

After nearly a decade of work, Oracle now offers a broad portfolio of cloud-based business applications that have evolved from its on-premises offerings. Fundamental changes are occurring in ERP systems because of technology developments such as cloud computing, advanced database architecture, collaboration, user interface design, mobility, analytics and planning. Oracle’s cloud ERP is maturing but, as is the case with most vendors, the company will need to continue to add functionality and capabilities to expand its market. The need to expand its software’s configurability and facilitate customization are challenges facing all cloud ERP vendors. For its part, Oracle has made great strides to provide the ability to extend its applications through its Platform as a Service (PAAS) capabilities. Oracle also has an advantage over other ERP vendors in that its HR applications are integrated with its ERP offering.

Oracle’s existing offerings and technology roadmap reflect the evolution to the next generation of ERP software, which supports what I’ve called digital process reengineering. Blockchain and artificial intelligence also are part of the ERP-in-the- cloud roadmap.

These are still early days for the cloud ERP market. Unlike some software categories, the ERP market has not been and will never be a winner-take-all situation. First, the shift to the cloud has happened at a measured pace and I expect this to continue (more on this below). Second, the “ERP market” in the cloud is inherently fragmented because a multi-tenant software-as-a-service (SaaS) software that has been more challenging to customize. Vendors with software designed for a specific vertical (for example, food and beverage) or even microvertical (say, beer) will have an advantage in competing for customers in these niches because their offering has been built to serve their specific needs and therefore requires both the fewest compromises and less effort to configure the software to suit the needs of the customer.

Although I expect companies increasingly will choose the cloud because of superior economics, a desire to focus IT staffs on strategic work and superior security, the transition will be slow compared to other software categories. One reason is that companies have been and will continue to be conservative in deciding 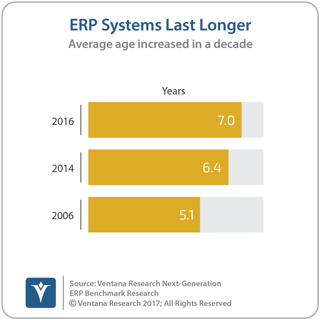 to replace an ERP system unless its failings threaten the orderly conduct of business. Our Next Generation ERP research found that the average age of these systems is seven years, up from 5.1 years a decade ago (which may have been affected by Y2K fear-driven replacements).

Even where a company uses ERP software from multiple vendors, the cost and time involved along with the risk of business disruption makes finance executives cautious about replacing their existing software. (Multiple systems are common: our research found that 69 percent of companies with 1,000 or more employees have ERP systems from multiple vendors; 27 percent have systems from four or more vendors.) The slow replacement cycle alone suggests that by 2022, fewer than half of the ERP systems in operation will be in the cloud even if, by then, a large majority of buyers opt for a cloud deployment. It’s therefore not clear that “late to the cloud” will necessarily disqualify a vendor with a solid, installed base of on-premises customers. Oldsters will recall that accounting software vendor State of the Art was able to maintain its market share even though it introduced a Windows version of its software only in 1998, years after its competitors.

So while it’s early to be calling winners and losers, Oracle has three advantages that likely will enable it to increase its market share over the next five years. One concerns its software: It is sufficiently mature to attract very large companies as customers. It also has a substantial amount of functionality aimed at a broad set of verticals, although at this point mainly services companies or the accounting and financial management requirements of manufacturing organizations. And there’s a virtuous cycle at work now: vendors early (though not necessarily first) to the market that are successful can have more referenceable customers, which is a competitive advantage in future sales opportunities.

The second advantage is the platform-as-a-service (PaaS) offering, which enables companies to create and manage services and application extensions that are well integrated with a core application without the complexity of building and maintaining any infrastructure. PaaS will be useful to systems integrators that want to add specific functionality to highly specialized microverticals. Currently, the ERP market is highly fragmented because so many vendors have created packages aimed at specific niches. It’s quite possible that many of these vendors’ on-premises offerings will be replaced by extensions built on the same platform as a core set of business functionality such as an ERP system. And the third is security. Larger vendors like Oracle with the ability to create and support state-of-the-art secure infrastructures will have an advantage in selling mission-critical business applications.

Two technology topics featured prominently at Oracle OpenWorld were blockchain technology and the use of artificial intelligence and machine learning, both of which will have a significant impact on business applications, especially ERP. A while back I noted that there is an extensive list of business use cases for blockchain technology. Blockchain or distributed ledgers have now achieved buzzword bingo status, but that’s probably a good thing as it calls attention to its vast potential. However, it will take at least three years to iron out the technology kinks and establish standards and protocols necessary to make its use a practical reality. Attending some blockchain sessions at Open World, I wasn’t certain that those teams are thinking far enough ahead to anticipate the architecture and supporting technology that will be required to smooth the transition from tinker toy to mainstream business applications.

Nonetheless, it’s quite right to focus on blockchain technology because it will be an integral part of ERP and financial management software in the future. For example, “smart contracts” will streamline business-to-business sales and purchasing. Blockchains can be used internally for cross-posting intracompany transactions, intercompany invoicing and payments as well as supporting a single unified journal at the headquarters or regional center. This enables near-real-time enterprise reporting and analysis down to the transaction level and eliminates the need to reconcile intracompany transactions accounting. It may also be useful as a transfer pricing control mechanism.

Despite the distributed ledger name, though, blockchains will not supplant ERP and financial management applications any time soon for keeping the books of a company. Blockchain excels at supporting inter-entity transactions, not recording the transactions of a business itself. To do that one would have to write a full-featured ERP application (an enormous undertaking by itself) using blockchains and that would burden the system with extensive computing overheads.

Another set of technologies that received a lot of attention for their potential impact on business applications are artificial intelligence (AI) and machine learning (ML). Over time, AI and ML will contribute to a significant increase in the productivity of the finance department. They are at once technology for today and for the future. Today, AI and ML are quite mature for activities fraud detection, automating intra-company reconciliations and customer-facing applications. Automation built on numerical data, application logs and other easily quantified objects produce reliably acceptable results in the near term, especially in narrow domains with limited decision permutations.

Yet in many cases, the bright promise of AI and ML software vendors have been painting is mostly a work in progress. At the other end of the maturity spectrum is natural language processing, which is just beginning to evolve. We’re still a very long way from being able to say to a digital assistant: “I’m going to Chicago on March 9 to call on clients. I need to be there by dinner. I’m coming back on March 11 and need to leave no later than 3 p.m. Make my airline reservations and book my hotel,” and be confident that it will be done correctly.

The future of AI and ML applied to business computing is more likely to be an ongoing series of incremental advances that steadily automate rote tasks. These advances will increase the productivity of accountants, supply chain planners and any other job function that today requires human supervision of tasks that a properly prepared computer can handle. ERP vendors will compete with each other on the breadth of automation offered and the ease with which their systems can be trained to conform to the requirements of specific companies and users. Oracle has made progress with Bots, conversational interfaces that can be trained to support business users requests for information and act on it.

The ERP market is quite competitive. Although Oracle’s shift to the cloud is off to a good start, it needs to continue to add features and capabilities across a wide range of industries and microverticals to achieve its market share potential. This will become increasingly important as later mainstream buyers begin to embrace cloud-based ERP. It also would enhance its competitive position with stronger integration of its in-context collaboration capability called Oracle Social Network. Our research revealed that 55 percent of ERP system users 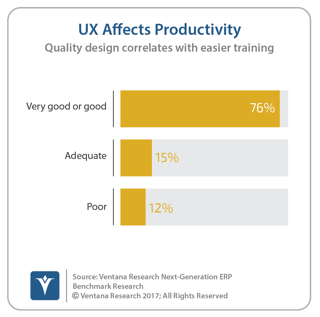 collaborate with colleagues frequently or all of the time. Oracle has put significant effort into the design of its user interface and user experience (UX) in its move to the cloud, which has enhanced productivity but more needs to be done. Our research shows there is a correlation between the design of an application’s user interface and the ease with which users can be trained: Three-fourths (76%) of companies with a good or very good user interface design found it easy or very easy to train employees on the use of the system. Only 15 percent of those with an adequate UI said training was easy or very easy.

I recommend that companies that are considering changing their ERP or financial management system evaluate Oracle ERP Cloud. The cloud offers potential advantages for all companies that include better performance and more rapid updates and patches as well as a lower total cost of ownership. Rapidly growing corporations will find that cloud-based ERP offers advantages compared to an on-premises approach, especially in the system’s ability to scale as the company expands and a lower administrative burden. Systems integrators or software companies in highly specialized micro-verticals may also find that Oracle’s PaaS in conjunction with ERP Cloud is an attractive option for their next-generation cloud requirements.