A looming challenge for companies in the developed world is price inflation, an issue periodically fretted over – but not experienced at a macroeconomic level in most developed economies – over the past four decades. Price inflation has been a frequent bugaboo that never emerged because of persistent disinflationary forces in the world economy over the past forty years. It remains to be seen to what extent recent price rises are persistent or transitory but “what if?” was the most important phrase organizations used in 2020. What if this time it really is different?

The threat of inflation has been a trending topic for the past year or so, especially in the United States. Those that lived through the stagflation of the 1970s are especially sensitive to the specter of inflation and recollections of an age when everyone assumed that everything would cost more next year. We are quickly coming up to the centenary of the German inflation of 1923, when a wheelbarrow of banknotes could not buy a loaf of bread, a memory of those roaring ‘20s.

The connection between technology and managing the impact of price inflation is the ability of software to see through the illusion of money. Technology does so by eliminating phantom profits from financial statements, allowing for more effective business planning as well as managing pricing with greater agility to strategically optimize revenue and profitability. In this respect, technology supports an approach I call "value-based planning," one that maximizes the long-term value of an organization by considering all its objectives. In an inflationary environment, value-based planning helps executives to think several steps ahead in assessing their options to achieving their strategic objectives. Ventana Research asserts that by 2025, fewer than one-third of organizations will have adopted value-based planning, but those that do will outperform their peers in achieving their objectives and long-term strategy. 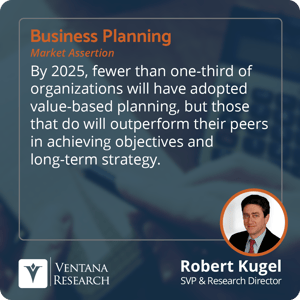 Phantom profits are the product of distortions to real economic profitability caused by accounting methods ill-suited to an inflationary spiral. For example, if a company has been buying merchandise for 80 and selling it for 100, and then inflation comes along and it can raise its price to 110, that company will show a nominal profit of 30, not 20. However, if replacing that inventory now costs 95, its real economic profit is 15, not 30, because the replacement cost of that inventory is even higher than the price increase. Moreover, since the company is paying taxes on those phantom profits, over time it has even fewer funds available to replace the inventory sold.

Last-in, first-out (LIFO) accounting was created to eliminate phantom profits because it presents companies and their investors with a more accurate measure of their income in an inflationary environment compared to first-in, first out (FIFO) inventory accounting. Using LIFO, the margin recognized on the sale in the previous example would be 15. At the same time, LIFO distorts balance sheets, understating the value of the inventory held (its value on the balance sheet is 80, not 95) and therefore does not accurately assess the company’s financial soundness using metrics that include that accurate inventory figure.

LIFO is not allowed under International Financial Reporting Standards (IFRS), the body of accounting principles used by most organizations outside of the U.S. The difference between the two sets of standards reflects the heavier emphasis on income statement fidelity under US-GAAP versus balance sheet integrity by IFRS. This difference reflects, in part, the longstanding use of equity financing and the historically more vibrant U.S. stock market where, since the 1960s, equity investors have focused on earnings. By contrast, traditional continental European finance practices, which heavily influence IFRS standards, lean more on debt for funding and therefore the ability of the balance sheet to support that debt.

Over the past decades, LIFO has lost its luster with corporations reporting under US-GAAP owing to quiescent price inflation. Today, fewer than one-quarter of public companies use LIFO. In the past, even during periods of inflation, companies with the lowest use of LIFO are those where there is rapid inventory turnover or historically relatively little change in prices during the inventory holding period. Under these circumstances, there is little difference between the two methods in reported profits. However, if inflation proves to be more than transitory, its use by U.S. corporations is likely to increase.

There are three ways in which technology can deal with persistent price inflation.

First, today’s ERP and consolidation systems make it possible to configure reporting income statement and balance sheet reporting in multiple forms, including LIFO and FIFO in parallel. For organizations that operate in multiple jurisdictions, for example, the best consolidation systems already create local financial statements using IFRS while the U.S.-based headquarters can report under US-GAAP. Similarly, these systems can create statements using both LIFO and FIFO, the latter for financial statement but the former to have a clearer picture of true profitability by eliminating phantom profits.

Second, the illusion of money can be avoided when financial planning and analysis (FP&A) explicitly applies price inflation assumptions granularly under multiple scenarios. The analysis of the impact of different sets of assumptions would also look at pro-forma balance sheets and statement of cash flow, with the latter used to determine whether the company’s ability to finance itself is being undermined by having lower than necessary economic returns owing to phantom profits.

A profitability management initiative involves parallel efforts by the Office of Finance and the Sales organization. The first, handled by FP&A, requires an ongoing profit analytics program. These analytics provide the rest of the organization with consistent and reliable information about true economic profitability – the profitability of products, customers and channels. This information is necessary to support better decisions about pricing, product bundling, sales quotas, incentive compensation and production. The second effort supports a price-and-margin management structure in the Sales organization that achieves an optimal trade-off between revenue and margin. Companies that use software to gain better insight into a buyer’s willingness to pay can set the highest possible price in a transaction with the greatest likelihood of getting the business.

Today’s price inflation may prove to be transitory, or not. I suggest that well-managed companies are already assessing the longer-term impact of sustained cost pressures and the degree to which they may be caught by margin squeezes owing to differences between the impact of price inflation on their inputs and their ability to raise prices. I recommend that finance organizations use available technology to navigate through periods of price inflation and avoid the peril of phantom profits.

AI Will Create Strategic Advantage for the Office of Finance