How payments are effected is an afterthought to many involved in a transaction, but flaws in this process can be a source of pain and frustration for those in the back office, especially in accounting and treasury. To improve the way payments are handled in business-to-business transactions, the once ubiquitous paper checks are giving way to electronic payments. This category includes credit, debit and virtual cards, wire transfers, as well as ACH (Automated Clearing House) transmissions that may be in the form of direct deposits, direct debits and electronic checks. Electronic payments are supplanting checks because they lower processing costs for both parties in a transaction; increase accuracy, auditability and control of the accounting; provide better visibility into payment status; and enable deeper insight into spend or customer metrics. Building on these digital advances, blockchain payment systems (BPS), now at an early stage in development and adoption, have significant potential in the market because they offer similar advantages at an even lower cost. I assert that by 2025, fewer than 20% of organizations will be using blockchain payment systems, but those that do will speed transactions, reduce overhead and cut costs. 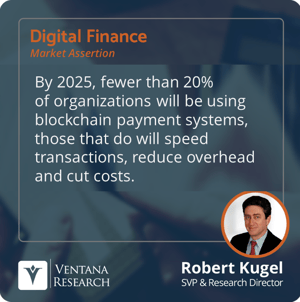 A BPS is designed to provide lower-cost processing that matches or improves on other digital alternatives for speed, visibility and insight into transaction detail. It can do so because it removes fixed costs and overhead incurred by legacy payment processors while almost completely eliminating latency in cash transfers. These features are especially advantageous in making cross-border payments as well as in handling transactions between small and midsize businesses because lower costs incurred in handling the transaction reduce the fees charged. Today, these fees amount to several percentage points of the amount involved.

Blockchains also offer greater security and transparency because transactions are tamper-proof and visible to everyone. Blockchain data is theoretically immutable but, as I’ve noted, the period of persistence on the blockchain can be limited as a matter of choice depending on the nature of the transaction. For example, long-lived assets and those where provenance is important, such as real estate and gemstones, should be kept intact forever, while there is little value to keeping public securities transaction records for a long period. I expect record-keeping standards will evolve to reflect differing requirements for retention.

Another beneficial feature of a BPS is its ability to support smart contracts, digital programs that are executed when agreed-upon conditions are met by both parties. These contracts allow for hands-free, immediate execution of an agreement, reducing administrative overhead and increasing the certainty of the outcome. A smart contract also can incorporate workflows that trigger follow-on actions to further reduce administrative overhead.

The blockchain distributed database (also called a ledger) was invented to create the peer-to-peer digital cash called bitcoin in 2008, but blockchain use cases have multiplied since then. In addition to supporting commercial payments of all types, the distributed ledger provides a secure and transparent way to track ownership of assets and reduce the potential for fraud. While the blockchain was invented for cryptocurrency, it also can be used to record transactions involving payments in national fiat currencies such as the dollar, euro or renminbi. Payment systems using cryptocurrency exist to provide the ability to transact using a universal medium of exchange, but options involving digital national currencies are likely to multiply for those that find the volatility in cryptocurrency values too risky. Moreover, in many countries, payment using cryptocurrency triggers a tax event requiring the recognition and reporting of the gain or loss on its value relative to the taxpayer’s unit of account in that tax jurisdiction.

The evolution of digital national currencies or Central Bank Digital Currency (CBDC) and potential regulation of related stablecoins are likely to have an impact on the evolution of payments technology. Although the availability of central bank-sanctioned or managed digital currency might seem to obviate the need for blockchain payment systems, their existence would facilitate the value-added services performed on the blockchain such as smart contracts, transactions data recording, foreign exchange and trade documentation, to name a handful. For now, forecasting the future of CBDC, especially on a country-by-country basis, is open to a wide range of conjecture since much has yet to be settled.

While I expect payment systems using blockchains will increase over the next five years, making money from operating a payment blockchain almost certainly will be challenging since it is likely that the market price for moving money from point A to point B will approach zero. That’s because I expect BPSs will evolve as an underlying technology used to improve the performance and lower the cost of providing existing transactions support such as banking, foreign exchange, trade finance and insurance; business software networks such as e-commerce and purchasing; and those entities already offering ACH services. Businesses that offer white-label blockchain capabilities to those service providers, in addition to those entities that offer blockchain interconnect services to facilitate transactions between different blockchain platforms, will be in the best position to monetize fractional cost services delivered in high volumes.

Over the past thirty years, technology has steadily reduced friction and cut costs in commercial transactions across almost every business model element, especially in administrative functions. It has been particularly beneficial to small and midsize businesses in this respect by relieving entrepreneurs of the need to acquire assets or retain staff to scale their business. Cutting the friction and costs associated with payments is a further step in this trend. Although I expect the uptake of blockchain for payments in the immediate future will be limited, it has long-term significant potential.

The Planning Center of Excellence

The Office of Finance Market Agenda for 2022: Effectiveness and Profits