Value-added tax is a type of levy that is applied at each step of a transaction chain, from basic inputs to the final good or service. The amount assessed is based on the value added by an organization (hence the name) when a transaction occurs. VAT is used throughout the world because, historically, it has been harder to evade compared to income taxes. VAT is a common method of national taxation: Approximately 85% of countries impose it worldwide. A notable exception is the United States, where sales and use taxes are imposed at the state and local level and applied only to the price of the final good or service. As commerce has become global and cross-border sales have increased, traditional methods for calculating, applying and complying with VAT regimes has grown more complex. To achieve higher tax revenue while ensuring better compliance, governments are turning to technology to make collections more effective while making processes more efficient.

Conceptually, VAT is straightforward, but the mechanics of measuring the value added isn’t always so. The taxable amount is essentially the price received less the direct costs – all materials, labor and services – associated with providing that good or service. VAT is usually implemented as a destination-based tax, where the tax rate is based on the location of the buyer and applied to the sales price. These rates vary because of differing national policies and priorities. The mechanism by which VAT is applied is an important detail: The nearly universal way is the invoice-based method, where the seller applies the tax to the sales price and is reimbursed for the VAT it incurred in the process of providing the item.

VAT became popular for tax collection because, in many countries, enforcement and collection are easier compared to income taxes. (Historically, the U.S. is exceptional in its high rate of income tax compliance.) However, VAT is an issue for both those that pay the tax and those that collect it. Our focus on intercompany financial management highlights the issue of corporations overpaying VAT because of inconsistencies in financial systems management of the invoicing between legal entities, especially in cross-border transactions, where the organization fails to collect credits. I assert that by 2025, one-half of organizations with 10,000 or more employees will have implemented IFM to achieve tax, risk management and financial close benefits. 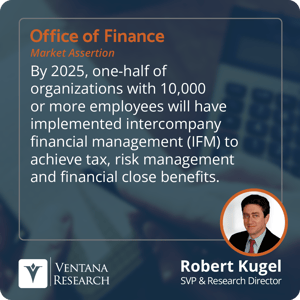 Tax authorities, on the other hand, face leakages in collection because of non-compliance and outright fraud. One example of the latter is the so-called “carousel” or missing trader fraud, where goods are passed around tax jurisdictions, collecting reimbursements for VAT previously paid. The ultimate seller of the finished good – a sham company – collects the tax but doesn’t pay it to the tax authority. For all of the attention paid to large companies orchestrating legal income tax avoidance, VAT fraud and payment leakage are thought to be much larger problems. Governments, though, are increasingly attempting to deal with the issue because of the digitization of commerce and the ability to manage collections far more effectively with greater efficiency.

Continuous transaction controls is a method of collecting taxes that is gaining popularity. It is a transaction-based method of reporting that collects data directly from an organization’s financial management system, either in real time or near-real time, eliminating the need for retroactive audits. From a tax authority’s standpoint, audits are costly to administer and can be less effective, since these occur long after the transaction takes place. In some real-time CTC jurisdictions, tax on each invoice is collected before the transaction can be completed. This method requires an organization to have a trusted business transaction ledger that can authenticate transaction source data. This is usually handled by accredited ERP or financial management software, but there have been discussions of using blockchain ledgers for some use cases.

China has been particularly aggressive in using digital systems for VAT collection, and CTC has been popular in emerging economies to improve enforcement of VAT and other indirect taxes. At the same time, developed world governments are also using this method to supplement or replace existing post-sale audit and supervision systems. CTC also benefits organizations because it cuts administrative costs and eliminates uncertainty about future audits and other enforcement measures. Vendors of Indirect tax software, ERP and financial management systems are increasingly providing capabilities for complying with evolving CTC requirements.

In the U.S., some method for collecting sales taxes at the time of transaction would be a boon to small and midsize businesses that now must collect and report out-of-state sales and use tax. Having systems and processes in place that immediately transfer the tax imposed on a transaction to the relevant tax authorities would reduce administrative costs and eliminate the potential for an audit, which is also costly to smaller organizations. One partial approach is having e-commerce and transaction management sites shoulder responsibility for reporting transaction data to tax authorities. Potentially, these systems could be required to collect and forward the tax levied to the relevant authorities. Using these high-volume nodes as the source of transaction data can simplify collecting data used for enforcement while reducing the administrative burdens on smaller and midsize businesses, especially those that sell exclusively through marketplaces.

Along these lines, since mid-2021, the European Union One-Stop Shop has offered a convenient method for simplifying compliance with cross-border consumer transactions. Under OSS, online sellers domiciled in the EU (including marketplaces) can register in one EU member state rather than in each state in which the organization does business, simplifying reporting and compliance workloads. At the same time, technology and the rise of marketplaces has enabled the EU destination state to levy VAT on cross-border transactions of services and low-cost goods that were not taxed before because of the difficulty and inefficiencies involved in assessing taxability and collection, expanding the tax base.

Jean-Baptiste Colbert, the finance minister to King Louis XIV of France, sagely observed, “The art of taxation consists in so plucking the goose as to obtain the largest possible amount of feathers with the smallest possible amount of hissing.” Value-added tax systems became popular in part because they were more difficult to evade than income taxes and relatively easy to administer and collect. Technology is providing a way to restructure VAT compliance to reduce the administrative burdens on both the state and the commercial enterprise while accelerating tax payments and minimizing tax leakage. Supporting the evolution in VAT will be ERP, financial management and tax software vendors that provide customers a method of managing processes with strongly authenticated data to reduce frictions in calculating and paying VAT.