Cloud Computing is More Than Multitenancy

There’s a growing realization that the multitenant approach to the cloud isn’t the only option that companies should weigh in deciding between deploying software on-premises and in the cloud. That some people describe the multitenancy approach as “the real cloud” reflects the contentious nature of some technical debates, especially those that occur early in the evolution of a new technology. Multitenancy does have advantages that confer cost savings, and these have been important in the first stages of cloud adoption. However, we predict that single-tenant structures will rapidly gain in importance as corporations mature in their use of cloud computing, especially with respect to how they manage their ERP 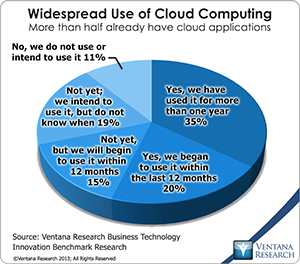 systems, as I have written. Corporations are increasingly adopting Web-based applications and moving their computing environments to a hybrid model that combines a combination of on-premises and cloud deployment options (private, community and public; single- and multitenant; or managed cloud). The right choice depends on the needs of the company and the ability of vendors to provide services that match their requirements.

At this point the focus on multitenant clouds is partly an artifact of history. Beginning in the late 1990s, the rapid adoption of the Internet and the dot-com mania that went with it led to the creation of numerous new Web-based business models, many of which turned out to be duds. Among these were application-hosting companies that in essence were selling single tenancy in the cloud structures. Unfortunately, these startups were more a case of technology in search of a problem than a service driven by market demand. Often these hosted services offered the worst of both worlds: the lack of customization that comes with multitenancy without the economic savings that multitenancy can provide. Partly because of this failure and the overwhelming success that multitenant services such as salesforce.com enjoyed, technology analysts and venture capitalists seem to have concluded that the single-tenant concept was inherently flawed rather than an idea whose time had not yet come.

Multitenancy was the most attractive approach in the early stages of cloud adoption because it provided sufficient economic incentive to overcome misgivings about the safety and security of the cloud and the durability of cloud vendors. The earliest successes were mostly in software categories that lent themselves to cloud deployment because they could be readily configured to the needs of an individual company even if the software and data structures were standardized. They were business-useful but not business-critical. Examples include sales force automation, travel and entertainment expense management and human capital management. A system outage would be inconvenient but would not cause a company to grind to a halt the way it would with, say, ERP, supply chain or shop floor management systems going down. The multitenant software services approach also has been successful in some mission-critical categories where affordability has been the overwhelming requirement. An example is ERP systems for midsize companies that have grown too large and complex for entry-level accounting systems but do not wish to make the substantial investment in an on-premises system. And low-cost multitenant structures have expanded the market for software that was previously unaffordable for smaller companies. This includes contact centers for small and midsize business.

Multitenant cloud offerings will continue to grow and thrive. However, the emerging opportunity is in offering software users other deployment options. One example is outsourcing the operation of perpetually licensed software to a public cloud vendor that assumes responsibility for its operation and maintenance. This could apply to migrating existing instances from on-premises to the cloud as well as new installations. This may sound like the old (and failed) hosting idea from the late 1990s, but virtualization and open source software have substantially reduced the cost of providing this type of service. Moreover, while a single tenant offering may be more expensive to provide than a multitenant, the total cost of ownership (TCO) may be lower for companies than on-premises if their internal, on-premises costs are much higher than the vendor’s. Or the TCO may even be higher but can be justified if the company believes it will get better results. For example, a company the specializes in managing applications operations is likely to be more adept at applying patches, bug fixes or new releases than a company’s internal IT staff, especially if the staff is small. To draw an analogy, most people would prefer to have open-heart surgery at a clinic that has specialists who do dozens of them each week rather than leaving it to a well-meaning specialist who might have done a dozen during his or her career among other operations. Having a specialist take care of this aspect of managing an application ensures that updates are performed properly on a timely basis and on a schedule that suits the company, not the service provider. In addition, even if it is more expensive the user of such a hosting service may place a high value on being able to have complete control over the application without having to manage its day-to-day operations. I recently spoke with a global company that has deployed its consolidation software in a single-tenant cloud for both of these reasons.

The largest potential white space in the single tenant market is ERP. To be sure, the multitenant cloud ERP market will continue to thrive because an increasing number of companies will find this to be the most attractive and cost-effective approach. On-premises ERP also will remain a viable model, especially for larger companies that have the resources to support and maintain their applications or that find on-premises is the best technical approach for their requirements. However, there are many midsize and smaller enterprise businesses that will not find multitenant ERP an optimal or even workable choice for their business requirements. They would benefit from having their perpetually licensed (or leased-to-own) ERP system operated by a service provider. Such a vendor might offer integration of the ERP system with a selection of multitenant analytical applications such as financial performance management suites (including planning and budgeting, dashboards and scorecards, and statutory consolidation and reporting) provided on a software-as-a-service basis. A big potential market for these sorts of ERP services is in migrating existing companies from on-premises to the cloud.

We see business computing moving to a hybrid of on-premises and various flavors of cloud offerings. An increasing number of vendors offer single-tenant or managed cloud options. The biggest challenge for service providers is likely to be figuring out how to define and price their packages. Some might be deluxe but pricey and so have a small addressable market, while others may be inexpensive but ultimately are unattractive to the market because they fail to deliver sufficient value. Some vendors’ applications are better suited to a managed single-tenant cloud deployment than others. That is, some software applications are easier and less expensive to operate than others, which is likely to make those a more attractive offering for a company that is attempting to build a business around operating and maintaining business software. In any case multitenant software as a service is not the only game in town. We are entering period of greater choice for companies and therefore increased confusion. Corporations will have to figure out what works for them, but they will be better off for having more options.