Social Collaboration Is in Finance’s Future 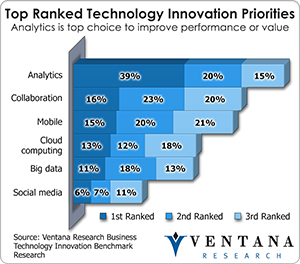 sales process or for broader employee engagement. The Facebook-style interface may cause finance department managers and executives to roll their eyes, especially if they’re over 40 years old. Yet business and social collaboration is an important set of capabilities that has been taking hold in business. Our benchmark research shows it ranking second behind analytics as a technology innovation priority. It will gain adoption over the next several years as software transitions from the rigid constructs established in the client/server days, which force users to adapt to the limitations of the software, to fluid and dynamic designs that mold themselves around the needs of the user. Perhaps because most of the attention so far on the benefits of collaboration has focused on front-office roles, there’s less awareness of the potential in back-office and administrative functions. Indeed, the same research reveals that those in front-office roles five times more often than those in accounting and finance roles (21% vs. a mere 4%) said that business and social collaboration are very important to their organization. However, I assert it’s just a matter of time before the finance group understands that social collaboration has substantial potential to improve its performance.

In examining why this change will occur, let’s start with some background. “Doing business” is all about collaboration, on which my colleague Mark Smith commented in an earlier perspective. Before communication technologies began to eliminate the constraints of time and space, people relied mainly face-to-face collaboration. (Postal letters were another option but they were very slow and limited interaction.) Voice mail was the first breakthrough in enabling people to collaborate quickly across time and space. Busy individuals could conduct conversations through a series of voice messages, discussing an issue in some depth and agreeing on an approach without speaking in real time. Much of business investment in information technology over the past two decades has been aimed at enabling good communications among different elements located in separate buildings, cities and even countries. The same is true for finance.

We all know that the eruption of social media – in both group settings like Facebook and one-to-many channels such as Twitter – has changed the dynamics of how people – especially those under the age of 40 – communicate. A couple of years ago, a group of teenage girls became trapped in a sewer under Adelaide, Australia. It took several hours to rescue them because the one with a phone used it to post their plight on her Facebook page rather than call someone. This example may be extreme, but it illustrates intergenerational differences in expectations of how one communicates. As with IM, software companies that build business applications are beginning to include Facebook- and Twitter-like capabilities to support collaboration. Examples include application platforms such as Salesforce.com’s Chatter, IBM’s Connections and stand-alone software that can be integrated with another vendor’s offering such as Socialtext that is now owned by Peoplefluent. Software that fosters collaboration can improve efficiency, for example, by resolving issues faster or finding easier or less expensive alternatives to addressing a need. It can improve effectiveness by improving customer satisfaction or enabling more informed decisions sooner. It can foster better alignment across business units as well across and within departments by enabling closer communications among their people.

Social collaboration is off to an encouraging start, but it’s easy to see where improvements are needed, especially to be useful to the finance function. Ideally, collaboration software will be able to understand the context of the work at hand, the role of the individual participant and the relationships the individual has with others in that context. A technology like Google Glass has the potential to enable a manager, while reviewing a report, to see that there have been comments posted related to specific numbers, text or charts and then select and read these just by moving his or her eyes.

As well, software imbued with social collaboration capabilities should understand and automatically manage the various types of relationships among individuals. For example, people in a company typically have a general role (“I’m in Finance”) and one or more task-specific ones (“I’m the director of financial planning and analysis”). Some relationships are persistent while others begin and end with a project. Issues that arise may be open to all or confined to specific groups, subsets of groups or a private dialogue. Queries or comments may be general, specific or somewhere in between. Some conversations, especially in finance and tax departments, must be tightly controlled. Software that understands the context of the work performed and automates the process of managing the who, what and when of the communications will support more effective collaboration, faster completion of tasks, greater situational awareness with the organization and as a result better decision-making.

Which brings me back to the relevance of social collaboration for finance professionals. There are many use cases for comprehensive collaboration capabilities in ERP or accounting and financial performance management software. A good deal (maybe too much) of what goes on operationally in finance departments involves checking details and correcting errors – activities that require direct communications. Resolving billing issues could be streamlined if receivables and sales or payables and purchasing were connected to the appropriate collaborative network in the context of executing business processes. For example, end-of-period reconciliations could proceed faster if communications among the right people in the departments involved less effort. The financial close has multiple steps where time saved by resolving snags or clearing up ambiguities consistently can have a meaningful impact on shortening the process. Likewise, planning and review involve a great deal of collaboration, especially in understanding assumptions and expectations or providing perspectives on causal factors behind better or worse than expected results.

Unlike those in sales and marketing, the stereotypical accountant and finance specialist is not thought of as “social.” And at the moment, few people working in finance departments say that social collaboration capabilities are very important to their jobs. An important aspect of my research agenda for this year points to the need to address the demographic shift from executives and managers from the baby-boom generation to those who grew up with computer technology. These shifts will drive demand for a new generation of software, one that emphasizes IT-enabled collaboration, mobility and agility. Social collaboration used in business applications should be more than a Facebook metaphor. It addresses a key drawback of instant messaging systems: the fact that in business, individuals have multiple roles and multiple networks of people with whom they interact. When tightly integrated into business software of all kinds, social collaboration will become an essential capability by enabling people to resolve issues faster and with less effort than other means of communication. Vendors that focus on the finance function should ignore today’s lack of enthusiasm for social but more practical collaborative capabilities and ensure that their software is designed for the next generation of financial software users.