Software to Fend Off Earnings Restatements

I’m wondering whether the rapid rise in earnings restatements by “accelerated filers” (companies that file their financial statements with the U.S. Securities and Exchange Commission that have a public float greater than $75 million) over the past three years is a significant trend or an interesting blip. According to a research firm, Audit Analytics, that number has grown from 153 restatements in 2009 to 245 in 2012, a 60 percent increase. What makes it a blip is that the total is still less than half the number that occurred in 2006 as the Sarbanes-Oxley Act began to take effect. As well, the number of companies restating is still less than one percent of the total. Yet it’s a blip worth paying attention to, since the consequences of a restatement pose a serious professional challenge to finance executives. The right software can help address some of the underlying causes that lead to the need to restate earnings.

Several factors are behind the increase in restatements. One of the more important is a rise in the vigilance of the Public Company Accounting Oversight Board (PCAOB), an auditor’s auditor created by the Sarbanes-Oxley Act to assess the quality of reviews performed by public accountants. The PCAOB was created because there’s an inherent tension in the relationship between external auditors and their clients, driven by three main realities. The first is that accounting is not bookkeeping; the latter is a process of factual data entry, while the former is a matter of interpreting the facts and making a range of estimates (such as the useful life of assets, future liabilities and tax expense, to name three) to present an economically accurate, coherent picture of the financial health of an organization. For that reason, an audit is called an opinion, which itself is the product of judgments and interpretations. Despite the increasingly rules-based nature of U.S. accounting standards, companies make a large number of assessments and estimates in preparing their financial statements, and auditors pass judgment on the reasonableness of them.

The second source of tension is maintaining the delicate balance between, on the one hand, having an external audit team that understands the underlying business and, on the other, maintaining “auditor independence,” a neutral relationship between the auditor and the corporate client. The two are interrelated because personal relationships develop over time that can affect this neutrality. Wisely, calls to impose “term limits” for audit firms (that is, requiring public companies to switch auditors periodically) went unheeded, because despite the risk posed by chummy relationships, a revolving door for auditors would have been expensive, burdensome and possibly counterproductive. The PCAOB was created precisely to ensure that neutrality is maintained through adequate oversight within audit firms.

The third factor is money: Auditors are paid by the companies they are reviewing. Most auditors have high ethical and professional standards; some do not.

There are two notable areas that driving the earnings restatements. One is the growing complexity of using US-GAAP in a world of increasingly complicated multinational businesses. The second is tax-related mistakes.

Over the past three decades, the Financial Accounting Standards Board, which is charged with codifying generally accepted accounting principles (GAAP) for the U.S., has adopted more of a rules-based, highly prescriptive approach to US-GAAP. Revenue recognition, for example, has snared many companies because it can be extremely complicated to administer, especially if people make mistakes in structuring and drafting contracts. Outside of the United States, most countries have adopted International Financial Reporting Standards (IFRS), which as applied is much more principles-based. The main advantage of principles-based accounting is that applying broad guidelines can be practical for a wider variety of circumstances. As well, rules-based systems offer no guarantee of the quality of reporting, since such precision can be used to manipulate accounting statements to produce more flattering numbers than what would be allowed in a principles-based regime. Accounting for taxes has grown more difficult as tax codes have become increasingly convoluted and corporations have had to become more precise in their treatment of this expense. As I’ve noted, direct (income) taxes are challenging, especially for companies with complex structures and those that operate in multiple jurisdictions, which is why companies increasingly find the need to integrate tax departments more completely with finance.

Software can help reduce the chance of a restatement 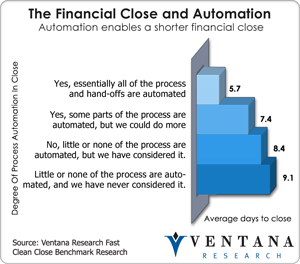 in a more demanding and complex environment. Our Trends in Developing the Fast, Clean Close research found that companies are taking longer to complete their accounting cycles compared to five years ago. Companies that have multiple financial systems can close faster if they use a dedicated financial consolidation system rather than spreadsheets. The Research shows that the time required to close is correlated with the degree of automation in the closing process – automation that consolidation systems support. The time saved on consolidation can be reallocated to more reviews of of the substance of the financial statement. The research also shows that companies that limit their use of spreadsheets experience fewer errors in preparing their financial statements.

Software also can play a bigger role in direct tax provisioning. Currently, most companies use desktop spreadsheets to support the tax data management, analysis and calculations that underlie their direct tax provisioning process. Companies need better control of this process and the underlying data so they can manage taxes more intelligently with less risk of having to restate.

In recent years there’s been increasing attention paid to the activities that take place between the completion of the financial close and when a company publishes its financial results. The “close to disclose” cycle involves coordinating the multiple disparate but interconnected threads that have to be orchestrated to complete the post-close external reporting tasks accurately and on time. It is a repetitive periodic activity that benefits from process optimization and automation. Software to automate the close-to-disclose process, which can substantially reduce the effort required to complete the work, enables tighter control of the data that goes into financial statements and filings, allows more time to review accounting estimates and treatments and therefore decrease the chance of an inadvertent error.

Earnings restatements may have increased in recent years but they are still a rare event. One reason for their relative rarity, though, is the enormous effort finance departments must expend checking and rechecking their work. Automation, better data management and a reduction in the use of desktop spreadsheets all contribute to reducing the risk of material errors and enable finance departments to allocate their resources to more intelligently to ensure that financial statement production efforts focus on sound judgment because there are fewer silly mistakes to spot.