Spreadsheet Denial is a Big Issue

Our recent benchmark research project, Spreadsheet Use in Today’s Enterprise, demonstrated that some companies have made modest progress in addressing spreadsheet issues, but there’s still much left to be done. Desktop spreadsheets can be an important source of productivity but, as I’ve noted, you need to understand their limitations and understand the practical alternatives. Users underestimate the impact of spreadsheet problems on their productivity because they tend to overlook the myriad little issues that constantly crop up. Being human, they overlook the ill effects that occur when spreadsheets are misused, and may be spurred to look for alternatives only when disaster strikes (as it did for one major bank). 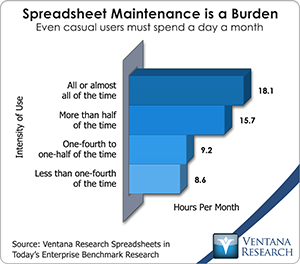 to use them, enough so that they find them easy to set up for even moderately complex models, and to do analysis and create reports. However, after more than a few people become involved and a file is used and reused, cracks begin to appear. Very quickly, our research confirms, a large percentage of the time spent with a file is devoted to finding the source of errors and discrepancies and fixing mistakes. When it comes to important spreadsheets that people use over and over again to collaborate with colleagues, on average people spend about 12 hours per month consolidating, modifying and correcting the spreadsheets. That’s about a day and a half per month – or about 5 to 10 percent of their time – just maintaining these spreadsheets. The burden is heaviest on those that use spreadsheets the most. We estimate that those that spend all or most of their time working with spreadsheets spend 18.1 hours per month (that is, more than two standard workdays) maintaining just one spreadsheet – the most important one used in their job. For those that spend more than half their time the total is almost two days (15.7 hours) per month. Even casual users, those that spend less than one-fourth their time, must devote about one day (8.6 hours) per month on this spreadsheet.

Participant responses varied in regard to how long it takes to address issues caused by spreadsheets. A bit more than half (55%), including some heavy users, said they spend little time dealing with problems in spreadsheets. Among the rest, 11 percent said spreadsheet issues consume a significant amount of time and reduce their productivity, while 31 percent said they consume a noticeable amount of time but have a minimal impact on their productivity. It’s difficult to take this last response at face value – something that takes a noticeable amount of time probably has a greater impact on productivity than individuals assume. Unless your job description includes “fiddling endlessly with spreadsheets as if there were nothing better to do,” this is a problem.

Our research and experience have led us to identify several factors that cause people to underestimate the negative impacts of spreadsheets on productivity. Generally, while the consequences of problems with spreadsheets can be broad and persistent, they are rarely catastrophic and infrequently serious. Thus, while people may be aware that they are losing time, each loss is a small one that they may soon forget. Moreover, since people (especially heavy and/or long-experienced users of spreadsheets) have adapted their work styles to deal with these issues, they may not view this chore as interrupting productive work. Finally, senior executives and decision-makers are not likely to be concerned by the increments of time that spreadsheets occupy people, especially since those whose careers go back to the beginning of spreadsheets still perceive them as productivity enhancers relative to paper-based systems.

Spreadsheet users tend to mentally minimize the impacts of spreadsheet errors. Errors in spreadsheets are common and may remain in place even when spreadsheets are checked and, indeed, audited. Yet few of our participants (even the most experienced and proficient users) said they do rigorous checking to ensure accuracy of the data; half check only when something doesn't look right, and when they do check they look only at selected cells. This likely is another reason why most people see no impact on their productivity from problems in spreadsheets; they simply don’t spend a lot of time checking for errors. It also may explain why mistakes have a limited impact on businesses – even the selective “eyeballing” method of checking for accuracy is likely to spot many of the blatant mistakes that would have a significant impact on business.

Spreadsheets also routinely pose productivity issues when they are used to collect data for use in collaborative processes. Such 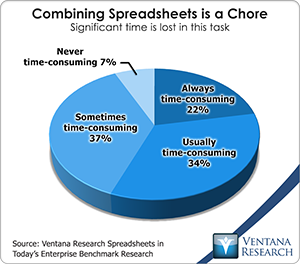 sharing is not confined to internal activities: Two-thirds use spreadsheets to collaborate with people outside the company frequently or occasionally. Such interaction often requires bringing together multiple files. Most (81%) of the participants and 88 percent of heavy users have to combine data from two or more spreadsheets (often from multiple contributors) to perform some business process. On average, people combine five spreadsheets at a time, although more intensive users combine somewhat more – approximately six compared to five for lighter users. More than half of users (56%) say that combining spreadsheets is a time-consuming chore.

Because desktop spreadsheets are so handy for so many purposes, many people use them in all sorts of ways when they should be using better alternatives. Spreadsheets were designed to be a personal productivity tool, good at prototyping models, creating simple analytics for decision support, performing one-off analyses using simple models and storing relatively small amounts of data for analysis and decision support. They weren’t designed to be used in collaborative, repetitive, enterprise-wide tasks. Especially in large organizations, desktop spreadsheets exacerbate data accuracy, availability and timeliness issues. They make managing any collaborative process more difficult than it should be. Corporations need to review their use of desktop spreadsheets in their most important processes to identify ways to reduce their use or eliminate them.