What’s a fast, free and reasonably reliable way of gauging the effectiveness of a finance department’s management? It’s the number of days it takes it to close the books. Companies that take six days or fewer after the end of the period to close their monthly, quarterly or semiannual accounts demonstrate a basic level of effectiveness that those that take longer do not. In my judgment, finance executives should regard a slow close as a negative key performance indicator pointing to less-than-effective management on their part. I draw this conclusion from our recent benchmark research, which  followed up similar research we completed in 2007.

The new research shows that companies in general take longer to close today than they did five years ago. Whereas nearly half (47%) were able to close their quarter or half-year period within six business days five years ago, just 38 percent are able to do so in our latest benchmark. Similarly, five years ago 70 percent of companies were able to complete their monthly close in six days; today only half can.

It’s not taking longer because people in finance organizations believe that a fast close is unimportant. The research confirms that most companies (83%) view closing their books quickly as important or very important. And it’s not that organizations are satisfied with their performance. Participants acknowledge that they can do better, saying that their company can cut at least two days on average from both the monthly and quarterly closes. The longer it takes their company to close, the more time participants said they could save.

While there is some evidence that external factors such as economic and regulatory events have increased the workload in the close process, this does not appear to have had a meaningful impact on overall closing intervals. About half of participants said that it has increased their workload, while another half said it hasn’t. Only one-third of companies with a heavier workload also indicated that their closing period had increased. Companies also pointed to factors that should help shorten the close, such as having systems from fewer ERP vendors and a more centralized accounting function.

The research results led me to conclude that companies that were fast closers five years ago (those that took six or fewer days) are still the fast closers today. However, many of those that were taking more than a business week five years are now taking longer to complete their accounting cycles. I suspect that one important factor contributing to a longer close was the paring of finance department staffs in the economic downturn, because companies that take more than a business week to close have too many manual processes, so with fewer hands to do the work, closing takes longer. Too many manual steps may be due to poor process design, not utilizing available software to automate calculations or poor data management practices.

Having too many manual steps in the closing process and failing to automate more are just two of several factors contributing to a slow close, but they are ones within financial executives’ ability to change for the better. Another is making a faster close a departmental priority. As basic as it may seem, the research shows that companies that make a faster close a stated objective are more likely to shorten their closes than those that don’t. Another simple process improvement is having a post-close process in place to assess how well the department performed, identifying bottlenecks and errors and developing specific recommendations to address their root causes. Among several strategies for shortening the close we proposed, more participants chose making a lot of little changes to managing the process as the best way to achieve that goal. Indeed, the data shows that companies that have a monthly or quarterly post-mortem are more likely to shorten their close than those that hold post-mortems less regularly or not at all. Another area that controllers and CFOs (or finance directors) of slow-closing organizations must examine is the degree to which they can simplify things. Raising the threshold of materiality in resolving issues can save a considerable amount of time, as can standardizing post-close journal entries. 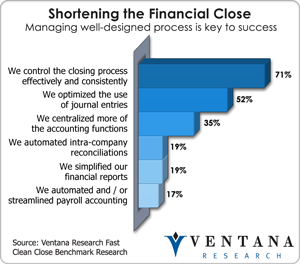 results would demonstrate progress – that is, more companies closing faster. Instead, the opposite is the case. Companies are taking longer to close today than they did five years ago. Extensive demographic cross-tabulations show that some companies are able to close within a business week, but others with the same characteristics are taking longer, being in the same businesses, similar in size and with similar organizational complexity and similar IT environments. When you control for all of these factors, I think the difference comes down to good management vs. mediocre or even bad management. Many senior finance executives will find this assertion intuitively obvious, especially if their closing period is six or fewer days. Others may not, especially if theirs take longer, and will cite reasons for their position. There may be many reasons why a finance department takes more than a business week to close, but there are no excuses. And that’s why I believe how quickly a company can close its books is a measure of a finance department’s effectiveness and as our research identified are taking smart steps to shortening the financial close. When their departments get to the point of closing quickly, CFOs and controllers who are determined to get past a “we’ve always done it this way” mentality in order to reduce time spent on purely mechanical tasks will be able to devote their resources to more analytical activities of greater value.