Intacct is a Sage Investment

The merger of Intacct (a private U.S. company) with Sage Group (a publicly traded company domiciled in the U.K.), announced in July, was the biggest company news over the past year. The combination created anxiety among customers and partners. That’s because in the 1980s Sage began executing a decades-long roll-up strategy, acquiring country champion mid-market ERP vendors across Europe as well as software companies in other countries, including the United States. Like many management groups of this era, they operated with a financially focused, relatively short-term perspective that didn’t benefit customers and partners. As usual, this approach works for public companies until, almost inevitably, the strategic deficits that grow ever larger with each passing quarter overwhelm even the best efforts to perform effectively.

However, Sage’s strategy has shifted in recent years. The current management team, in place since 2014, has been focusing on moving to the cloud, rationalizing corporate operations and cutting overhead. Progress-to-date has been encouraging but there are still significant challenges in evolving the organization’s culture and transitioning its customers, prospects and channel partners to the cloud. Keeping Intacct intact as a strategic business unit will be key to making Sage’s strategy work. Preserving the growth trajectory of the company’s successful management group, culture and product will help to achieve the market share, customer satisfaction and financial results that would justify the $850 million acquisition cost. To that end, Sage Intacct has been operating with a high degree of autonomy as a strategic business unit with the senior leadership group remaining in place. The stated intention is to keep it this way.

To put the merger in a financial context, through the end of June 2017 (the latest available data), Intacct’s annual recurring revenue was $96 million, a 35 percent compound annual growth rate from the $39 million recorded in the same period in 2014. A majority (64%) of the company’s recurring revenue in the 12 months to June 2017 was generated through its direct sales channel and the remaining from channel partners. Sage reported revenue for the fiscal year ending September 2016 of 1.6 billion pounds (approximately $2 billion at current exchange rates).

Intacct’s management viewed the merger as a way to expand internationally without making a major investment in building its own channel outside North America and the infrastructure to support a direct sales organization worldwide. Intacct’s management stated that it had been on track to do an IPO with the proceeds going to fund its international expansion. The need for this expansion became greater with the merger of NetSuite and Oracle. That combination facilitates NetSuite’s international expansion because it can piggyback its direct sales and channel business development efforts on the existing network of Oracle offices worldwide.

As a standalone public company, the ongoing cost to Intacct of an international expansion likely would have cut into R&D to meet the financial ratios demanded by investors. So being able to expand geographically without having to sacrifice ongoing enhancements to the application was also attractive to the company. Moreover, the cost of some common R&D and infrastructure investments will now be spread across a larger combined company.

At the user group meeting, the opening keynote included the usual litany of product enhancements. The company does four quarterly releases, and the list presented included 150 product enhancements. One worth highlighting is Advanced CRM Integration, which integrates processes performed in Salesforce with back office accounting to accelerate a company’s quote-to-cash process. Sage Intacct also says it will be releasing an integration with Salesforce CPQ (Configure, Price and Quote) to synchronize contract data generated in Salesforce CPQ quotes with Sage Intacct. The company’s objective here is to simplify and automate invoicing and help manage revenue recognition under the new accounting standards, ASC 606 in the United States and IFRS 15 elsewhere. Management also highlighted its product’s ability to scale to handle large data volumes – measured, for example, in terms of journal entries, invoice lines and API calls. It noted that its volume capacity had increased 50 percent over the past year while response times had declined 10 percent.

For context, the keynote also included the company’s 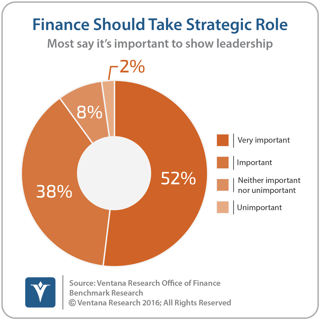 perspective on the evolving role of the CFO – the transition it sees from the bean-counting historian to someone engaged in leading a company’s growth, using data and analytics to improve performance. That view resonates with our Office of Finance research, which found that almost all (90%) companies say it’s important or very important for finance departments to take a more strategic role in the management of their company.

The software Sage Intacct offers is designed to support a more strategic finance function. I’ve been using the concept of “continuous accounting” to highlight the pivotal role technology plays in enabling a CFO to implement changes necessary to make his or her department a strategic partner with the rest of the organization. Sage Intacct can provide a cornerstone of that technology. The application’s structure readily supports end-to-end process and data automation that preserves data integrity, eliminating the need for checks and reconciliations that consume valuable time.

Sage Intacct also can support another element of continuous accounting, distributing workloads continuously over an accounting period. Doing so can shorten the period-end close process and address a longstanding issue: most companies aren’t able to close their books within the accepted target of one business week. Our research found that only 40 percent of companies can complete their quarterly close within six business days. In fact, one out of four (26%) take more than two business weeks.

A shorter close accelerates management and financial reporting. It also de-stresses the accounting department because most of the work traditionally done in a rush at the end of the period has already been completed. Using Sage Intacct’s ability to handle statistical accounts and collect nonfinancial data, dashboards and reports can quickly provide individual executives and managers with detailed data and metrics that enable them to monitor their performance and address issues and opportunities by exception.

By automating more routine departmental functions as well as eliminating the need for time-consuming and unproductive checks and reconciliations by ensuring data is accurate, finance and accounting organizations can achieve efficiency gains that free them to focus on improving their effectiveness. 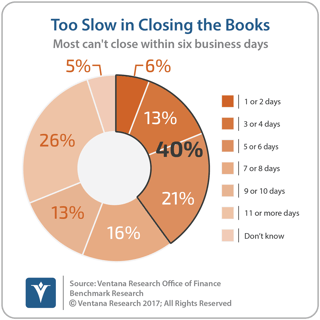 Intacct’s strategy has been to focus on services for businesses in specific vertical and especially micro-vertical segments. For example, one of Intacct’s core verticals is financial services. Within that broad sector it specifically serves investment managers, among other microverticals. The software goes beyond internal accounting to include statistical accounts (such as performance metrics) and investment tracking, which can be complex, especially if managers are investing in hedge funds, private equity or venture capital. Often these organizations resort to using desktop spreadsheets to track and analyze investments and report on performance. However, managing these sorts of investments is best done using a multidimensional data structure because it greatly simplifies data collection, analysis and reporting and can substantially reduce the amount of time required for these activities. Moreover, it improves the accuracy of these processes by maintaining data integrity. The above example illustrates just a handful of the features that are especially useful to one specific microvertical but the concept applies to most of Intacct’s customers.

The microvertical strategy Sage Intacct is pursuing is an important differentiator in cloud ERP applications because it more precisely fits the needs of these target companies without forcing them to sacrifice capabilities or make compromises in executing business processes.

At the event, Intacct stuck its stake in the ground for the application of artificial intelligence (AI) and machine learning (ML), unveiling a digital assistant for finance departments using the brand name “Pacioli.” The name references the 15th century Franciscan friar who is credited with codifying double-entry bookkeeping. (Coincidently, SAP has branded its AI and ML efforts with the name, “Leonardo.” Da Vinci and Pacioli were contemporaries who knew each other.) No Pacioli products have been formally announced. Rather, Pacioli is a statement of intent to imbue Intacct’s software with capabilities that enhance the productivity of finance and accounting professionals. Having made the announcement, however, to avoid being tagged with peddling “vaporware,” the company will need to both offer capabilities within the next 12 to 18 months that reduce the need for manual tasks and interventions that can be handled by exception and provide prescriptive guidance.

The market for ERP and financial management software designed for midsize companies remains highly competitive. Sage Intacct faces a long list of competitors including (among others) Acumatica, Microsoft Dynamics and NetSuite as well as dozens of specialized on-premises and cloud-based vendors. The merger should enable Sage Intacct to accelerate its penetration of markets outside North America. The ability to sell an integrated financial management and HCM suite (Sage People) should make the offering even more competitive.

Cloud-based ERP offers many potential advantages for midsize companies, including better performance and more rapid updates and patches as well as a lower total cost of ownership, as it eliminates the need to dedicate valuable IT resources to system maintenance. And, because security is of paramount importance to cloud ERP and financial management software vendors, cloud vendor sites that have undergone certification are almost certainly more secure than most midsize companies’ on-premises environments. I recommend that midsize companies that are considering changing their ERP or financial management system evaluate Sage Intacct’s offering, especially those in businesses that align with the company’s verticals and microverticals and those that operate globally.