A quarter century ago the “fast, clean close” became a key measure of a finance and accounting department’s effectiveness. Since then there has been general agreement that companies should be able to close their books within a business week. Our research on the accounting close has consistently shown that companies with very similar characteristics (measured in terms of revenue, number of employees, location and industry) vary considerably in the number of days it takes them to complete their accounting cycle. The lack of connection between the structural conditions of a corporation and the time it takes to close the books suggests that the obstacles to a faster close are not innate, but the result of poor process design and execution, insufficient automation of the process as well as choices made by finance executives. One of those choices is deciding — for whatever reason — not to close sooner.

A fast, clean close is an important measure of the competence and effectiveness of the department. Companies that close within a business week almost always are more competent in how they manage the process and therefore use resources more efficiently. In turn, this frees up time that CFOs can use to fix other process issues that hamper the effectiveness of the department, which allows 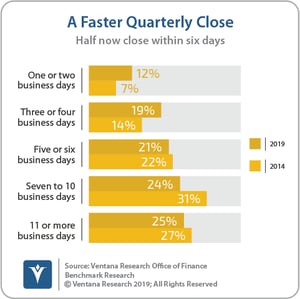 departments to concentrate on more valuable analytical tasks. Companies that close their books within six days after the end of the quarter are more likely to provide executives with timely information and are able to respond to markets and competitors with greater agility. Moreover, by focusing on issues that are delaying the close, the department likely will uncover the root cause of other issues that diminish its performance.

Ventana Research has been measuring how long it takes companies to complete their monthly and quarterly accounting close for 15 years. Our latest benchmark research on the Office of Finance shows a significant improvement in this metric for the first time: This time around 61 percent of participants indicated their company completes its monthly close within six business days compared to 53 percent in 2015, with nearly half (46%) finishing within four business days compared to the previous rate of 29 percent.

The research identifies one factor that very likely has contributed to the overall shortening of the close: an increase in the degree of automation applied to the close process. The percentage of companies that apply a substantial amount of automation more than doubled to 25 percent from 11 percent, and a larger majority (83%) of companies now apply at least some automation compared to 60 percent in 2015. 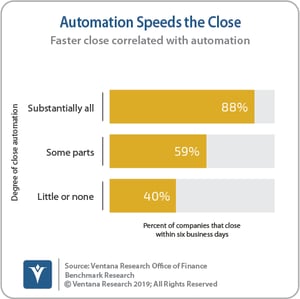 In accounting, reconciliation is the process of ensuring that two sets of records agree. It is a tedious job, ripe for automation. The research found that a higher percentage of companies, 60 percent, are automating their reconciliations process compared to 37 percent in 2015.

Contrary to what one might assume, the research found no correlation between whether a company is public or otherwise must file its financial statements with a third party (usually with some deadline) and how long it takes the company to complete its quarterly accounting close. Half (50%) of companies that are required 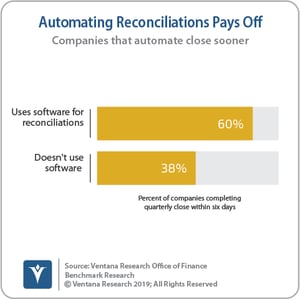 to file financial statements with a third party close their books within six business days compared to 55 percent than do not have to file.

These findings are encouraging, but here’s a cautionary note. When the phrase “fast clean close” came into wide use in the 1990s, the objective was a clean (that is, accurate and complete) close, not a fast close at any cost. However, some anecdotal evidence we’ve collected over the past year suggests that in some departments, the “clean” part isn’t always observed. In some cases, organizations are making a substantial number of material corrections and journal entries in the week or weeks following the “close.” This behavior may be a response to having a performance metric of closing the books within one week, which leads finance executives to take shortcuts to ensure the metric is satisfied. We will be studying this phenomenon in the future.

Virtually all (99%) companies have considered automating all or part of their close process. However, the correlation between the degree of automation applied to the close and how soon a company closes its books suggests that finance and accounting departments should do more than just consider automation. Organizations should have a firm plan to automate the close process as much as possible, especially those that take more than a business week to complete their close. This commitment should be part of a rigorous examination of the close process to identify and eliminate bottlenecks and unnecessary activities.