In 2013, the Organization for Economic Cooperation and Development (OECD) published a report titled “Action Plan on Base Erosion and Profit Shifting” (commonly referred to as “BEPS”), which describes the challenges national governments face in enforcing taxation in an increasingly global environment with a growing share of digital commerce. Country-by-country (CbC) Reporting has developed in response to the concerns raised in the report. To date, 65 countries (including all members of the European Union but not the United States) are signatories of the multilateral competent authority agreement establishing CbC reporting.

Large multinational companies – ones with sales of 750 million euros or more – are now required to report a consistent set of financial and operating data to the tax authorities in the signatory countries in which they operate. This reporting is designed to give national tax authorities better visibility into each company’s relevant data to enable them to assess the adequacy of their tax payments. This includes revenue, income, cash taxes paid and taxes accrued, employment, capital, retained earnings, tangible assets and activities.

CbC reporting is challenging larger multinational companies because of its requirement for unprecedented transparency and disclosure. Finance and tax departments will be better able to face CbC challenges using dedicated tax software and a tax data warehouse of record. The latter recasts of all of a corporation’s tax-relevant financial data in a tax-centric way. This is necessary because tax accounting exists in a parallel universe to financial and management accounting.

Tax authorities are concerned that multinationals have been using artificial albeit legal means to avoid paying their fair share of taxes (“fair” is a fuzzy term, of course). Governments want to be able to pierce the corporate veil, so to speak, to be able to use some objective data to prevent this avoidance. In other words, they are hoping that CbC disclosures will result in higher tax payments.

However, they may be disappointed. One reason why the pickings may be considerably slimmer than countries suppose is U.S. tax reform. The largest share of large multinationals is headquartered in the United States, and many of those trade in intellectual property (IP). The ethereal nature of IP makes it harder to pin down how much economic value is created within a given legal entity. Because of this, these companies have found it possible – and profitable – to shift a considerable amount of income to low-tax countries. If the United States reduces its corporate tax rate substantially, many of the tax-management schemes now in use will cease to have value because income will be recognized in legal entities domiciled in the U.S.

Amidst all this turmoil and potential for change, large multinationals are recognizing that they need to manage their tax reporting to host countries more carefully. There’s a real danger that country-by-country reporting will expose them to reputational and financial risk even if they follow the letter of the law. These companies will need to be transparent and consistent in what they report to local tax collectors. Senior executives, country managers and boards of directors will need to review in advance the data that will be disclosed. Corporations may find there are trade-offs to consider in their income and tax structures. To do all of this consistently and well, they must have information systems to make their tax compliance efficient, consistent, transparent and reliable.

In theory, a corporation that pays its legally mandated taxes should have nothing to fear from CbC reporting. However, despite organizations’ best efforts to keep tax-related data confidential, it’s likely that there will be leaks that have the potential for reputation damage. This is particularly true if politicians or activists in countries leak selective information. Governments might want to do this to extract additional revenue from the company. Activists or opposition parties might use it to embarrass their government. Beyond the simple cases, what constitutes the right amount of income can be complex, especially when a corporation’s total tax payments are considered.

One of the most important things companies operating in multiple tax jurisdictions can do is be certain that the data that they present to each country is consistent and optimized for the optics of country-by-country reporting. In my view, that means having a “single version of truth” – an authoritative data source – from which it prepares individual country income tax calculations as well as its CbC reports. They also need the ability to build a defensible allocation of their worldwide income, tax and operational data. The needs for both the authoritative data source and the ability to optimize the allocation of reported income means having the right technology to manage what amounts to a large and complex data set as well as the right technology for analyzing it. That technology is not the desktop spreadsheets that most corporate tax department use.

Technology can play an important role in reducing risk associated with CbC reporting. Our Office of Finance benchmark research found 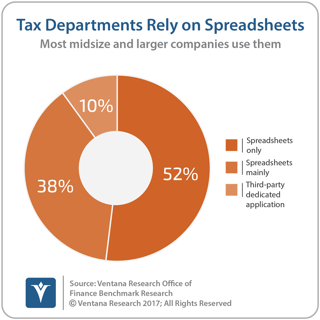 that almost all (90%) of midsize and larger companies use desktop spreadsheets for the tax calculations and provision in their tax departments; 52 percent use them exclusively. One important reason they use spreadsheets is to recast and record statutory financial data to make it relevant for tax analysis and provisioning. Not only is this process time-consuming, it’s a substantial source of calculation risk and increases the likelihood that the company presents an inconsistent set of numbers for CbC reporting. Working from a tax database of record ensures consistency and can provide management and the board of directors greater visibility and transparency into the company’s tax process and positions.

To the extent that tax accountants can cut the time they spend wrangling spreadsheets, they can be doing more analysis and optimization of their tax provision and tax positions. They would be able to spend more time advising the CFO, CEO and their board on strategies for tax compliance to minimize tax expense while limiting the risk of non-compliance and the potential for reputational risk. Being well prepared to defend the taxes the company is paying to countries in which it operates ought to be a priority for CFOs.